1. Hairline. Newborns look just like Jason Statham or Stannis Baratheon or some other dude that’s totally hot but you’re embarassed to say it because he’s like totally old like 40 or 70 or whatever.

2. They smell bad. Like, not all old men, but you know, there’s always that creepy older dude in the family that has the impossibly bad breath? It’s like he needs to go to the dentist, but he doesn’t even have teeth, so what’s rotting in there? Don’t you clean your dentures? Yeah, your breath smells like a baby’s diapers.

3. No bladder control. Aww, this one just made me sad. We’re all gonna be wearing Depends some day, but you know, just rest assured that it won’t be the first time you pee on yourself by a long shot. At least when you’re geezin’ you won’t accidentally pee in your own face while you’re getting your diaper changed. Right? You know what, don’t answer that.

4. They snore. This baby’s not overweight, but he’s sawing logs like 50-year-old in a recliner. Likewise, a baby will wake up just long enough to fart and then go back to sleep. Remind you of anyone? 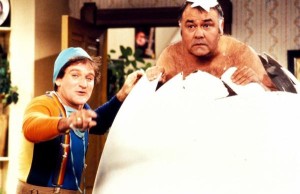 And we're not just talking about that creepy Jonathan Winters character on Mork and Mindy.

5. Only eat mush/liquids. Geez! This is supposed to be a comedy article. Why does it have to be so damned depressing? I mean, I was on a liquid diet for like a month, and I had to teach myself how to play the blues just to cope with it. No wonder newborns are grumpy all the time.

6. Inappropriate behavior. I’m just saying. We let babies and senior citizens get away with a lot. “He doesn’t know any better.” “That’s just how they used to talk in the 1940s.” Yeah, right. I guess if Buzz Aldrin grabbed your boobs, you’d just be all “Aww, he’s so cute!”